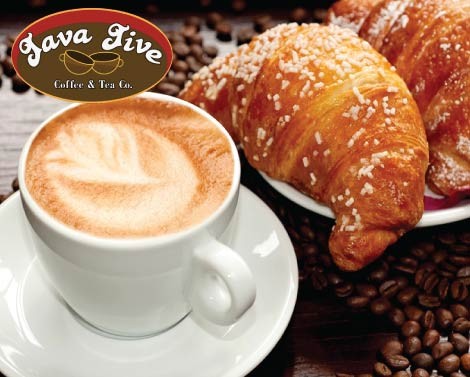 Life has been dull for you ever since you lost your lucky penny. Some may say it’s only a penny, a cent in the grand scheme of things, but to you, that penny was the muse for your entire life’s work.  The sun shines less bright, rainbows feel like shades of grey, unicorns seem less awesome; even coffee has lost its zing; something has got to be done to reawaken your creativity before you find yourself following another reality show.

Originally opening its doors as a P.A.M.'s franchise in 1994, Java Jive has been one of Church Street's famous hang out place for many years. Since 2010 it has been under new and improved management, making it one of the best coffee joints in the city. Their fast and friendly staff are very attentive and willing to make your stay a comfortable and enjoyable one with their smiles and their pleasant demeanor. Java Jive’s atmosphere is cozy and welcoming and has a very warm vibe in the air. Freshly brewed coffee with the extra TLC makes all the difference at Java Jive and the taste speaks for itself. Yet the delightful menu items also add to the allure. Their coffee cake is merely to die for and must be tried as is their apple spice cake made with real chunks of apple; both served in huge slices for a meager price. Plus their breakfasts are warm and toasty and delicious as they are made right in house, like their breakfast sandwiches which get rave reviews. Get there now while the coffee is still piping hot!

Java Jive will bring bathe you in a whirlwind of caffeinated delight and snackable goodness. The experience was so breathtaking and inspiring that the ideas won’t stop flooding from your brain. Was it just the joy of amazing service or could it be that lucky nickel you found under your table; either way if it ain’t broke, don’t fix it.

“I love this little gem on the north end of the village. The owner is pretty much the friendliest dude I've ever seen behind a counter.  The rest of the staff are helpful and friendly, too. You can usually get one of their drip coffee blends without waiting, but if the carafe is empty they'll offer to brew up a fresh batch if you don't mind waiting (and it's not five minutes to close, of course).  You can always grab an espresso based drink, too. I started frequenting here when I moved into the neighbourhood over on the other side of Isabella Street; although they rotate the flavoured coffee regularly, if you're lucky enough to run across the blueberry, you'll probably be hooked right off the bat just like I was.”
- Brett C.

“Good food, great people. Cups on Church as it's now known is a great local gem where you can get good coffee, good food and no attitude! You don't have to learn Starbuckian here!  Give it a try, great patio too. Not only is the coffee at Java Jive simply amazing, there's always a selection of treats available - if you grab a home-made oatmeal bar, go for the raspberry (but the blueberry's good too). I really dig the breakfast sandwiches, too. Give it a shot, and ask what's for lunch/dinner/brunch - where does this guy find the time to cook every day?”
- Mark D.

Discuss
Top Brands. The Best of Your City. Unbeatable Prices.
We find incredible deals on local business, products, events and travel and unite buyers to lower prices.
About
Partners
Contact
@buytopia
Featured On